I have had some tough times with brownies recently so I was a little nervous that I’d mess up (I spent about £7 on chocolate alone!) but I took the plunge anyway…

Actually – before we start, I’ve calculated that these come out about 430 calories per brownie (if the batch is cut into 12)

After a quick google search I settled on the Woman’s Own Recipe (<—that’s a handy link to the recipe and ‘how to’)
I liked this recipe as it was simple and included a no fuss brownie mixture, it was easy to follow so I was happy (you can see the easy steps in my wonderful step by step below ha)

My favourite part was smushing the halved creme eggs into the slightly cooked brownies (see photo number 5). Cutting the Creme Egg’s was a bit tricky so make sure you use a really sharp knife and do it quickly (without cutting yourself!!) otherwise the Creme Egg mushes and crumbles and that’s not what we want…(see photo number 4)

I think they were a little overcooked as the edges were a tad crispy (probably because I had my oven too low to start with so I ended up cooking them for longer than recommended – hmpf!) but they did actually turn out well. They were so goey and chocolatey and lovely and rich….actually, they were really delicious. An all round winner I’d say! 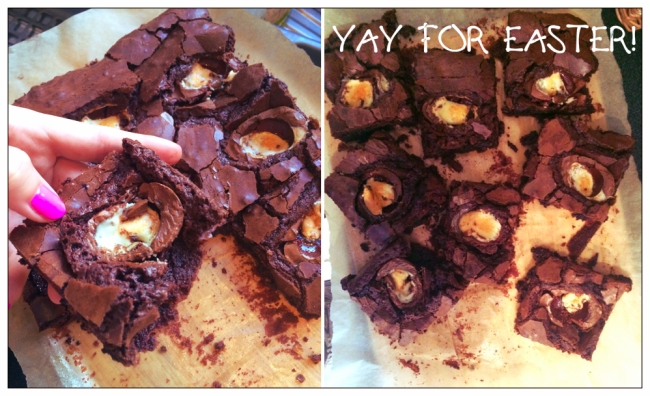 What have I been rambling about?